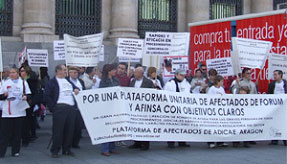 ADICAE used this national case, with much more political impact, to connect with AVA case. It succeeded to launch a GUARANTEE FUND in 2004 that generalized payments to those affected of AVA. Of the 89 millions Euro lost, those affected have managed to recover 36 millions. It can be said that almost all the claimants have recovered their savings thanks to this Fund.